Generate renewable energy from resources of plant for our society

Since we were established in 2000, Nippon Biodiesel Fuel (NBF) has been researching and developing raw material plants, their excellent varieties, cultivation technology, and applications for biofuels. In 2012, we established a local subsidiary, Agro-Negócio para o Desenvolvimento de Moçambique, Limitada. (ADM), in Mozambique, East Africa, to run projects using the research outcomes. ADM has organized a farmers’ union of 6,000 people in areas with no electricity and cultivated Jatropha [Jatropha curcas L.], a raw material for biofuels. We also refined oil, sold fuel, as well as bought, processed, and sold agricultural products such as rice and cassava, through running local retail stores.

With the aspiration of creating a post-peak oil society, we consider the elimination of poverty penalties in developing countries as a business opportunity and contribute to social capital development. Our business aims at local production and consumption, in the fields of energy, food, and finance, which are the foundation of industrial development. For example, when we started working in Mozambique, the fuel price in the provincial capital was 120 yen /L. However, the energy price was higher in remote regions such as our operation area with 150 yen /L and 180 yen /L in the outland. This situation where people in remote areas are forced to pay higher costs is just one example of poverty penalties. We aim to contribute to the improvement of regional affluence by realizing energy prices equivalent to urban areas even in remote locations by using locally produced energy rather than energy that is brought in from outside.
We chose Jatropha because it thrives even in harsh environments and has a greening effect in deserts. In addition, it produces high-quality oil, and as it is not edible, supply is quite stable at relatively low cost. Our renewable energy business will lead not only to the elimination of poverty penalties and regional development, but also to business activities in the field of global environmental conservation, where a number of issues such as global warming, resource depletion, desertification, and food security issues are intricately intertwined.

In Mozambique, 6,000 members of the cultivate association distribute seedlings and plant them as a green-fence between fields and houses. We buy and press seeds for seed oil, which then is refined to produce alternative fuels for light oil. Selling it to local corn millers means they do not have to buy oil from far-off ports

thus saving them transportation costs. In addition to ensuring a stable supply of Jatropha oil at low cost, we are also developing various new technologies that promote the effective use of by-products, such as fertilizer made of the seeds’ pulpy residue. In collaboration with local governments in Japan, we have conducted a project where we run buses fueled by Jatropha oil safely and successfully without breakdown

For us, sustainability is not a temporary strategy to only solve the problems in front of our eyes, but rather a corporate attitude that strives to improve the strategies sought by lifestyles and values of the next century and further centuries. On top of that, we take into account changes in environmental and lifestyle values and structural changes in the economy and society. We will continue to protect the global environment with an eye to the future century and continue to grow our business. 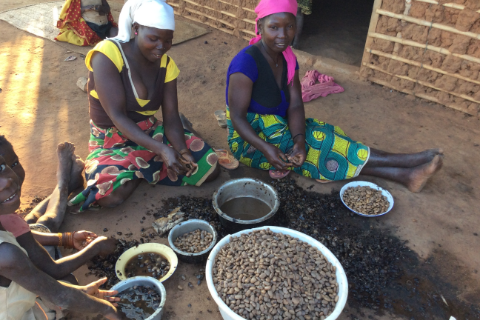